Who doesn’t love a little geography? Topographia began as a project with Spring Leaf Press some time ago and gradually eroded. It resurfaced as I was going through the unfinished project pile. I struggled with choosing to complete it versus tossing the whole thing in the trash. I decided to keep the pages, but didn’t know how to finish them.

I moved one step closer to making an actual book by reinforcing the card stock pages with book cloth and sewing the text signatures onto tapes. I did it twice, because the initial thread I used wasn’t strong enough.

The book languished for another three months before I tackled it, largely because I wanted to participate in a rapidly approaching exhibit. When I first began the project, I imagined a three dimensional cover that represented a raised map, and I decided to run with that. I used book board as a base and paper mache to sculpt ridges and valleys. I cut slits in the book board beforehand to allow for the tapes to be threaded through it. Because I procrastinated, I needed my covers to dry quickly, so I popped them in the oven at 250 degrees. This decreased the drying time, but increased the warping. I put weights on the covers as they came out of the oven to help maintain flatness.

Next, I used acrylic paint to help the landscape along. Once it was dry, I threaded and glued in the tapes, leaving them exposed on the inside cover. 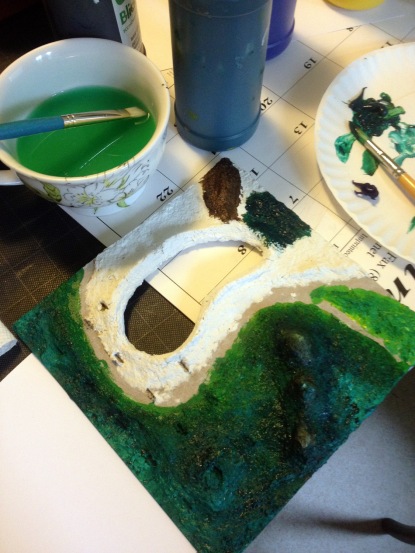 The end result reminds me a lot of a fifth grade diorama; rough, but full of charm. 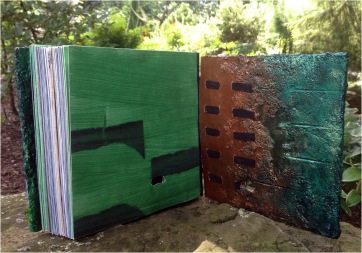 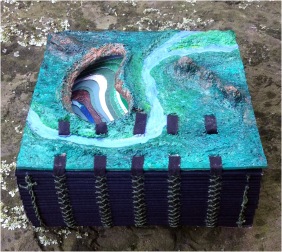 I got it to the exhibit on time and displayed it with a few of my other artist’s books in June of 2017 (yipes!). There was great opening night participation, and it also turned out to be an interesting exercise in encouraging viewers to touch the art.

When I learned I was leaving for the left coast, I packed it up with other art paraphernalia and brought it along. It recently made another appearance at Hidden Villa’s Homesteading Day, where it mostly delighted kids of varying ages.

Maybe there’s some truth to the diorama. 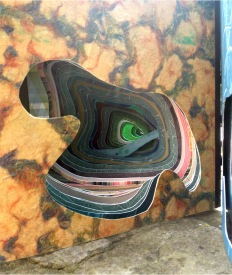