I live in the rural lands and I miss the accessibility and sparkle of The City. When I was in my early twenties I moved to Seattle, Washington from central Pennsylvania. The variety of food, men and shoes available were unbelievable. I tried pho for the first time, met an architect at a film festival and bought my first pair of Vogs. Over time, I lost perspective and forgot what was dear to me. I got caught up in the culture and the concrete. I felt alone, depressed and stopped taking advantage of anything Seattle had to offer. Eventually, I returned to Pennsylvania and then moved to Indiana.

I know myself better now. I can walk off my porch and into the woods. I leave the garage unlocked so the neighbor can borrow the chainsaw. I live in a place where someone will stop if I have a flat tire. I do not have to pick up after my dogs.

And I still love cities. Pittsburgh, Phili, Baltimore, D.C. and New York are all within easy reach when I want a little more art, action and limited release movies in my life.

A friend of mine left the green spaces of rural Pennsylvania last year for the grittiness of Pittsburgh. Initially she had trouble seeing the beauty in it and missed the stillness she left behind. I wanted to give her something that would help lend a sense of grounding to her day if she needed it. I was playing around with concepts of ritual and reliquaries at the time and I decided to make her a portable altar.

I used an Altoids tin as the vessel. I removed the color from the outside with a dremel tool, leaving some of the letters behind and applied some new imagery. 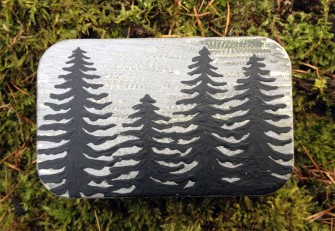 When the box is opened, the contents are removed and the altar constructed.

It unfolds to reveal a moonlit forest. The contents include an acorn, a pine cone, a bit of moss, quartz and two miniature deer. All local to central Pennsylvania. And what altar would be complete without incense? Forest flavored. 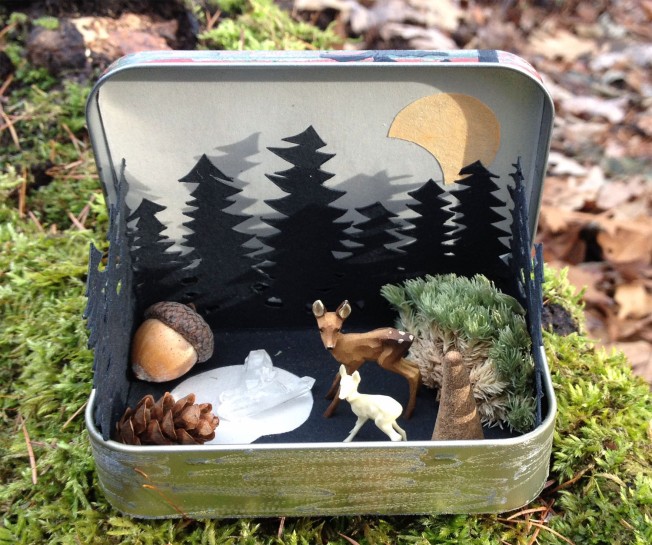 I don’t know if carrying around a tin full of nature helped her transition. Or if encouraging a ritual around a places you leave is healthy. I remember that spending time in Volunteer Park, or Green Lake wasn’t enough for me to feel whole. I missed where I came from and the grounding effect it had on me. My friend has transitioned beautifully into an urban landscape and is wrapped up in the scene of the city. And I can visit on weekends.